I received a request for a Vietnamese beef jerky recipe earlier this summer. It funny that the writer mentioned thịt bò khô (“teet Koh bo-AH”) because I was thinking about how hard it is to find good Asian beef jerky. I love jerky because the flavors develop and release in your mouth as you chew. It\’s dried but has an organic quality in your mouth.

At Chinese markets, I’m bewildered by the choices and spend too much time figuring out the difference between beef, pork, and fruit-flavored jerky. In Vietnamese strongholds such as Orange County’s Little Saigon, there are shops such as Vua khô bò (“King of Beef Jerky”) that specialize in beef jerky. At Vietnamese markets, there are usually wispy slices of jerky in plastic bags up at the cash register but you don\’t know how fresh it is or who made it.

Then I remembered meeting Chef Son Giang of Vien Dong restaurant in Little Saigon and chatting about how he made his own in the oven. My late uncle, Bac Thao (my father’s older brother), made jerky in the oven too. Pondering those two men and their jerky, I thought I’d make some myself. My fantasy Vietnamese beef jerky has a slight chile heat, lilting sweetness, savory umami depth, and lemongrass back note.

The recipe below combines all the elements I fantasized about. It is terribly easy to make and affordable too. Had I realized all that, I’d made Viet beef jerky a long time ago! On my first try, I used flank which was full of beefy goodness but hard to thinly slice. At the Chinese market butcher counter, the cut I needed stared me right in the face:  rump. It’s not fatty, is easy to thinly cut, and is tough – the kind of meat you want to make jerky out of. After all, jerky is chewy preserved meat, right? A rump roast is inexpensive (about $4.00 a pound) and available at any regular supermarket. I froze it for about 45 minutes while I was outside sealing my patio. This is my way of multi-tasking. You get a 50 percent yield so 2 pounds of beef produces 1 pound of jerky. The investment is less than $10 for a pound of amazing beef jerky.

Beyond that, the rest is a no-brainer. Marinate for 1 hour, then bake on a rack for about 1 hour at a moderately-low heat. That’s it. You’ve got Vietnamese beef jerky for noshing or adding to a northern-style Vietnamese green papaya salad. Give it a whirl.

Feel free to tinker with the marinade. Add 1 to 2 teaspoons of curry powder instead of lemongrass, for example. Just remember to tweak the seasoning BEFORE adding the raw meat.

1. To make the beef easier to cut, freeze it for about 45 minutes, until firm. Use a sharp knife to cut thin pieces, each a scant 1/8-inch thick. Cut across the grain to get tender results. Transfer to a pan or bowl. Set aside.

2. For the marinade, put the chiles, lemongrass, and sugar in a mini food processor. Chop and/or grind to a fine texture. Add the fish sauce and both kinds of soy sauce, and process to blend well. Taste. You should be able to distinguish the lemongrass and chile in the savory-sweet sauce. Add a little fish sauce should you need extra depth.

3. If the meat has wept juices, pour them out. Then pour in the marinade. Use your hands to ensure that each piece is coated on both sides. Cover with plastic wrap and set aside to marinate for 1 to 1 1/2 hours.

4. Position 2 racks in the upper and lower third of the oven and preheat to 300F. Line two baking sheets with foil, spreading the foil out beyond the rim of the baking sheet like wings to support dangling pieces of beef. Put 1 or 2 racks atop the foil in each baking sheet. I have 2 racks on 1 sheet and 1 on the other. Aim to elevate the beef as much as possible.

5. Arrange the beef flat atop the racks. They can touch but try not to overlap them much. I often let some of the piece extend beyond the rack onto the foil.

This beef is in the raw state. Array the pieces close to each other.

6. Bake for about 1 hour, until the beef is dark reddish-brown and they have shrunk by about 50 percent of the original size. They should be slightly flexible when done; if they’re crisp and dark brown, you have gone too far. Feel free to the pieces midway, though I find it unnecessary. 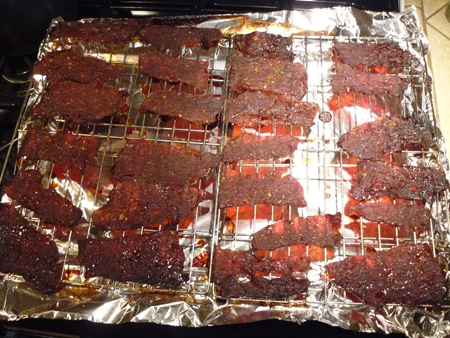 Look at the shrinkage in the beef jerky!

7. Transfer to zip-top bags or airtight containers to store. Refrigerate and return to room temperature before using. I just made the jerky and venture that they can keep for a good month, at least!

I like to nosh on the jerky with some pickled daikon and carrot (do chua) for a tangy-sweet contrast.

Remember that Ông bà nội [grandpa and grandma] made Thịt nai khô [venison jerky] whenever Ong Noi got a deer. Later on, Bac Thao made Bò Khô with beef. Our family used nuoc mam [fish sauce], gừng [ginger], and đường [sugar] to marinate the meat and then slowly dried it over charcoal. The finished slice was about 1/4 in and we kept it in a jar. It was kind of chewy but taste really good. It did not look red, but kind of dark, and could be kept for a pretty long time because of salty Nuoc Mam. We kept it for a long time. Venison jerky is something to make if you are a hunter. Try it if you have time!